Beer rings are often misunderstood. Normally shunned as bad for the environment, ours are made of photodegradable plastic and can do much more after they are removed from the can. Read on to learn how to upcycle beer rings! Ethereal pendant lamps are both inspired by plants and made of six-pack rings hung from plastic take-out lid frames. The lamps are lit with LEDs, so they emit nearly zero heat and last a long time!

The Lotus lamp is made of 40 folded six pack rings secured with crimps made from 1 soda can. The Pine cone lamp is made of 66 layered rings strung together on wires. Every two rings is separated by spacer beads made from 2 soda cans. It has a decorative cord sleeve knit from 20 plastic shopping bags Before you decide to build the SIX PACK HAMMOCK, be sure you have a place to hang it. There are no absolute rules about distances between hanging points or height off the ground. If you are going to make your own hammock, it can be constructed to fit the space you have.  To hang the hammock, use large screw eyes at the attaching points and mount them about five or six feet above the ground. Screw eyes can be put directly into a tree without harming it. The actual height of the hammock is easily adjusted, but you still might want to have a helper and yourself hold the hammock in position to be sure your hanging points are properly placed.
MATERIALS
at least 75 plastic six-pack carriers
clothesline
2 wood sticks
2 metal rings
2 “S”-hooks

CONSTRUCTION
First detrmine the size of the hammock you are going to make. If you have selected a place to hang the hammock, measure the distance between the two hanging points. The “body” or people part of the hammock should be about half that dimension. The harness that supports the hammock at either end will take up the rest of the length.

A good two- or three-kid size hammock (as shown in the photograph) can be made from 90 six-pack carriers— nine across and ten long. The body of the hammock and the harness are both made at the same time by weaving clothes line through the holes in the plastic carriers. The hammock is woven one lengthwise row at a time. Lay out a single row of carriers to the length of the hammock body you want. Place the carriers lengthwise so that their end “circles” interweave and partially overlap.

Continue to add rows of carriers in the same way until the hammock is the width you want. After the last row, weave another length of clothesline through the circles along each of the two outside edge rows.

Lay the hammock flat and square on the floor. To make the “spreaders” — the devices used to keep the ropes separate from one another— find two flat sticks and cut each of them a few inches longer than the width of the hammock. Place one of the sticks at each end of the hammock body and mark the positions of the ropes on the stick. Drill a hole at each mark down the center of the sticks. The holes should be large enough for the rope to go through easily.

Gather the cords at one end of the hammock and bring them together at the end. Tie each cord individually to a large ring, being sure to adjust each cord so that the hammock will lie flat on the floor with no cords kinking. Snip off any excess cord ends.

You can hang the hammock directly to the support eye hooks using “S” hooks, or using two more “S”-hooks and two short lenghts of chain, you can make the hammock height adjustable.

The SIX PACK HAMMOCK requires no maintenance and can be used outdoors year round. IT is strong and safe for adults as well as kids.

Here’s what you will need to make 1 large snowflake ornament: Take 2 of your 6 pack rings and lay them back to back on top of eachother.  You’ll notice that they curve in one direction.  Stack them so they curve away from eachother like the next photo Staple them together here and here Now you’ll fold them to match the Staple marks 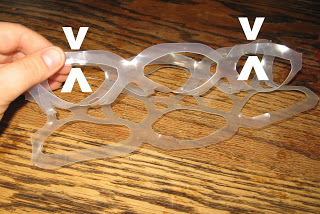 Repeat on the back side It will look like this when both sides are done

Get 2 more 6pack rings and repeat, then you will connect them together: Staple at the arrows, flip over and staple in the same place on the other side Now you’ll run your fishing line through 1 side Cut off excess fishing line and use to make a ring to hang your snowflake: 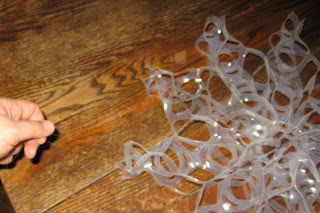 Cart has been replaced

Login first to save cart
Back